About the Land & Flora

Located in the lower Piedmont of Georgia, the Whispering Hills Memorial Nature Preserve is in a forested setting on rolling hills with deeply dissected ravines formed by two small, spring-fed creeks. Soils are exceptionally rich in nutrients and are dominated by mixed hardwoods such as White Ash, White Oak, Red Oak, Redbuds, Hickory, Florida Maple, large Loblolly Pines, and Dogwoods.

The History of Whispering Hills

Whispering Hills is located on land with a historic past, a restorative presence, and a sustainable future. The property is nestled upon the gently rolling hills of West Georgia, a mile south of the Chattahoochee River and a mile north of Yellow Jacket Creek on Mooty Bridge Road (GA. Hwy. 219). Visiting the land brings a feeling of serenity reminiscent of the time before recorded history. The virgin soils, native hardwood forests, and natural meadows were un-trampled, save for the occasional footsteps of ancient hunter-gatherers. The United States purchased the land in treaty with the Creek Nation in 1825. Settlement started when Georgia began distributing the land in 1827. Prior to that, it was the habitat for woodland creatures and native birds only. The earliest known village was miles away up the Chattahoochee at Grayson’s Landing.

The plowman’s labor tilled cleared fields beginning in 1830. Contoured terraces were established around 1900. Wooded hillsides were reserved for the resources they provided the farmer. As agricultural endeavors subsided following World War II, much of the plowed land returned to forests, dominated by volunteer pines. The land today is closer to what it was before 1827. Its aura is enhanced by Federal lands and the 25,000-acre Lake West Point that borders it to the north as well as the 9,000-acre West Point Wildlife Management Area across the Chattahoochee.

Ralph W. Howard, Sr., and his wife, Ira Lee (Norton) Howard, began purchasing the terraced fields and forested hillsides in 1946. The Howard property, consisting of 140 acres, was inherited by siblings Ralph W. Howard, Jr., and Gloria Jean Howard. As development spread northward from LaGrange toward their property, they investigated ways to preserve the rural character of this land. Developing a memorial nature preserve that incorporates a natural (green) cemetery is their solution. Their proposal, with Troup County Commission approval, resulted in the formation of Whispering Hills, LLC which is now officially registered by the State of Georgia. The nature preserve will leave and protect old-growth trees which, over time, will further return the land to the native hardwood forests and natural meadows of its historical past.

As one moves upslope into drier, rich woods. Small rock outcrops and boulder fields are found. Here, beech is still present, represented by smaller, fewer trees. Good white oak and white ash occur in the canopy. Dogwood (Cornus florida), red bud, and chalk maple are in the fairly open understory. In the ground layer, bloodroot and lopseed are still common, along with scattered clumps of Indian pink (Spigelia marilandica) and one clump of the rare tripartite viola (Viola tripartita var. glaberrima). In openings, rock outcrop and boulders have large ebony spleenworts (Asplenium platyneuron) in their crevices.

To the northeast upslope, loblolly pines are mixed with white oak and other hardwood species. The understory is somewhat weedy, but redbud again is abundant and forms thickets, indicating high calcium soils. Farther northwest near the ridge boundary, pine-mixed hardwoods are present and dominant. Several light gaps and open fields within the Whispering Hills Tract are dominated by agricultural grasses such as red fescue (Festuca rubra) and ruderal wildflowers such as ox-eye daisy (Chrysanthemum leucanthemum). 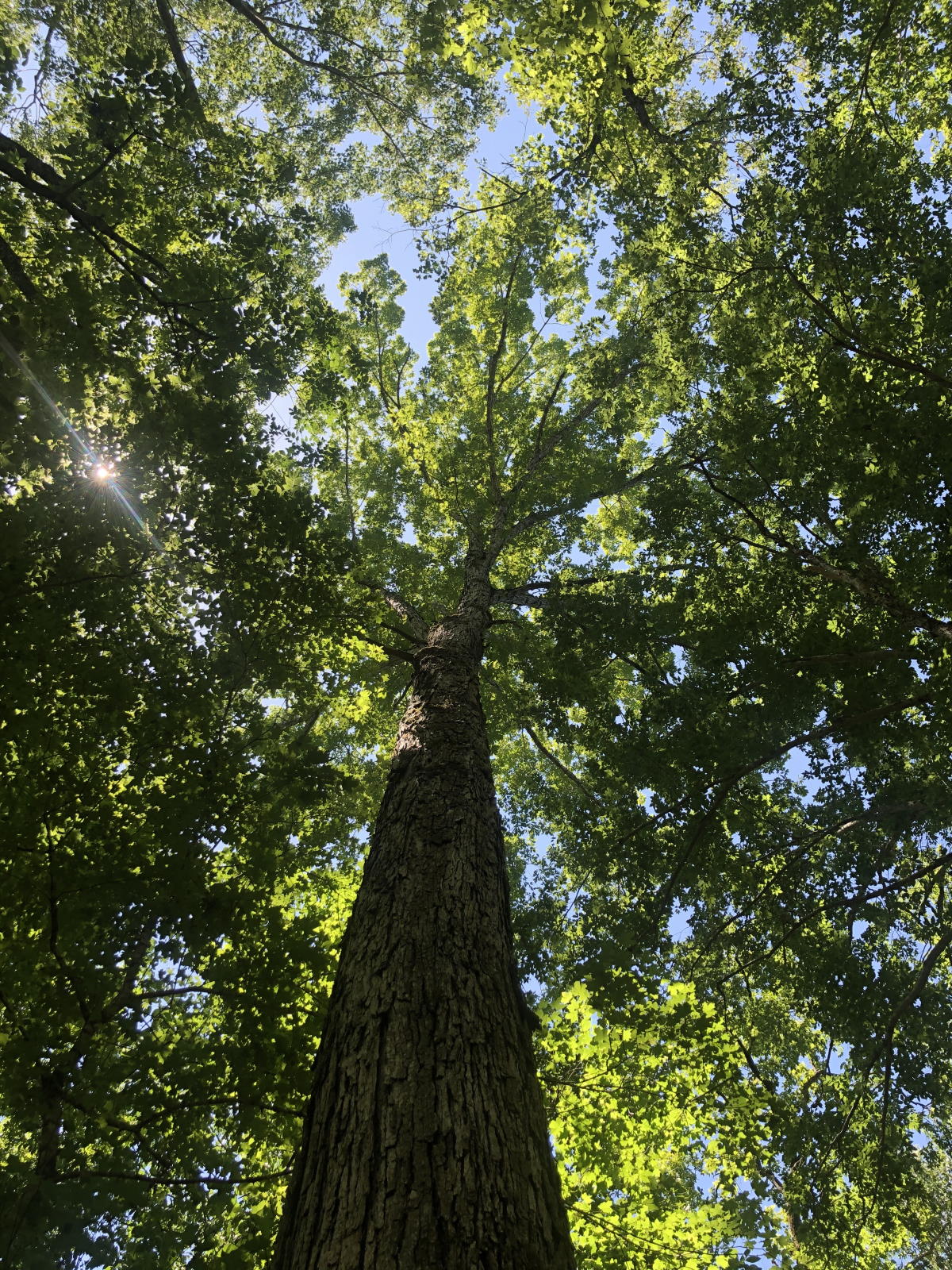